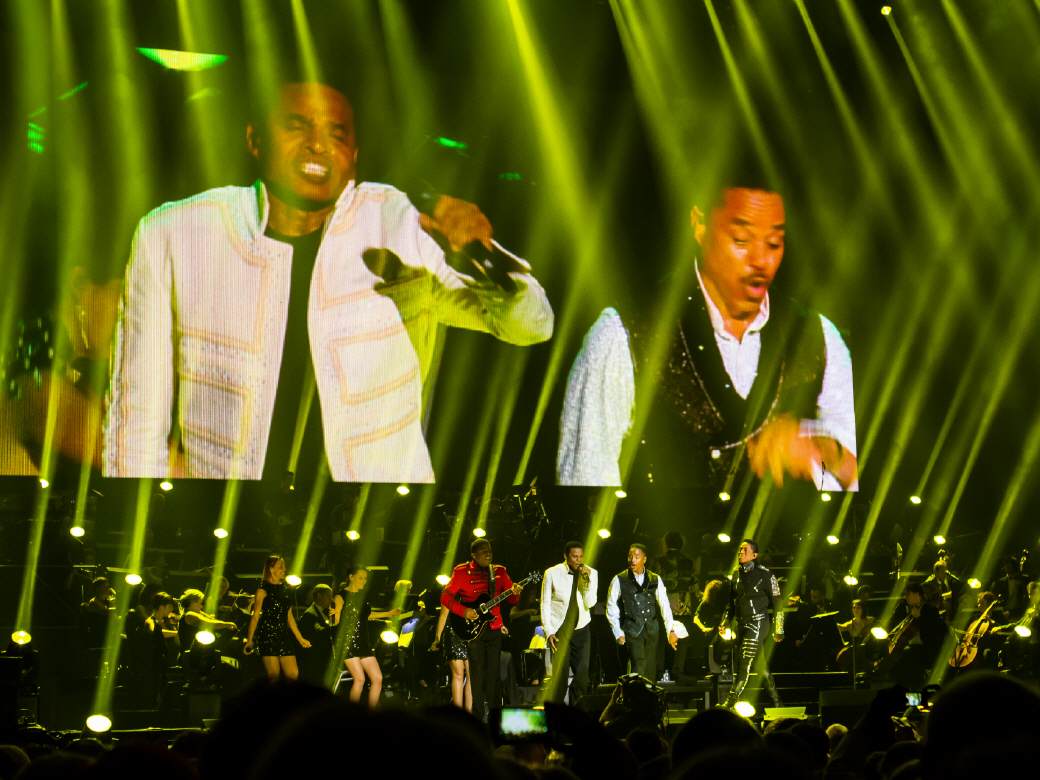 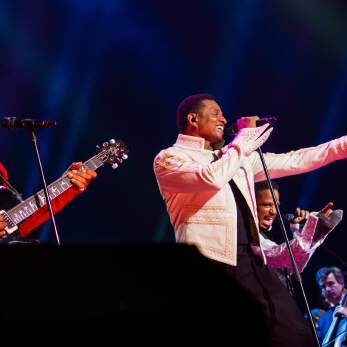 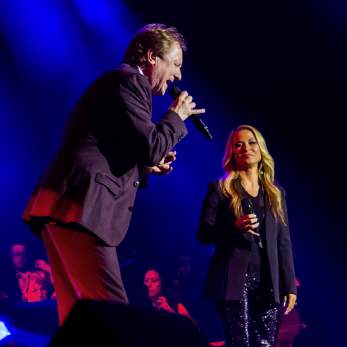 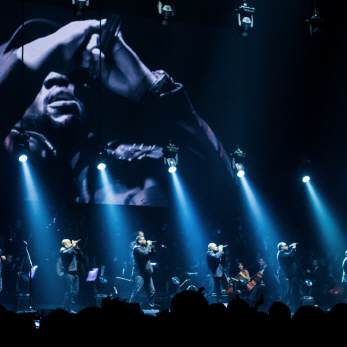 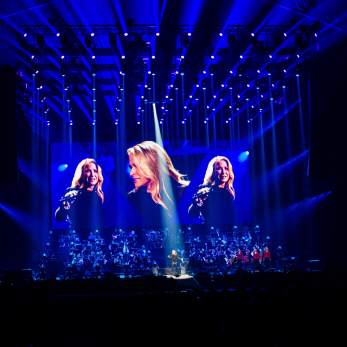 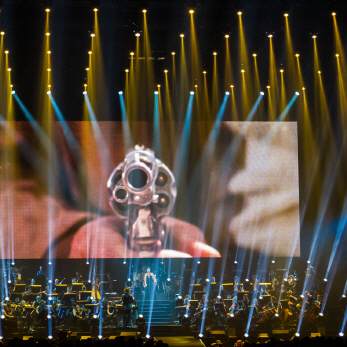 Let me start by telling you how proud we should be of the fact that such a production with this quality comes from us: Flanders and Europe. Anastacia, The Jacksons and Naturally 7 all express their thanks to conductor ‘Bobby’ Groslot, orchestra Il Novecento, the Electric Band and the backing vocals: Liv, Marjolein and Hille. Arrangements, light, audio and video are on a high level. But although there are a lot of American artists this year, it hasn’t become a typical American show. The combination of musical sincerity, the professionalism, the atmosphere and the (Belgian) humour all add up to the unique aspect of Night of the Proms, year after year.

This isn’t a copy of the successful 2011 concerts; again this is evolution. You thought the 2011 Battle was unique? If it was indeed, we can’t be satisfied with a mere copy or a watered down version. The ‘duel’ of Naturally 7 and Il Novecento was more a ‘duet’, where both players played together, each according to their qualities. Just like the duel, the Allegro for Dancing Harp was convincing. In both pieces there was a lot of connection to the younger audience. We heard music of Lana del Rey, Gotye, The White Stripes and Queen. During the years the two Jans have evolved in their music taste, but the last couple of years the organization was looking for more accession to current music. Young and Old were thrilled. 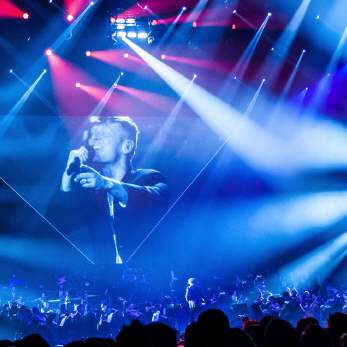 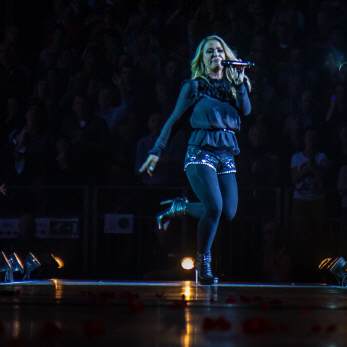 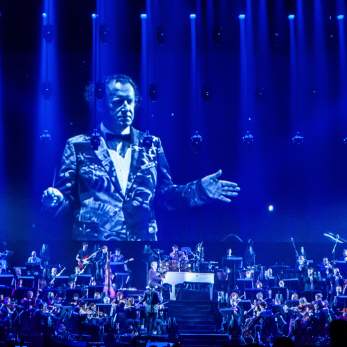 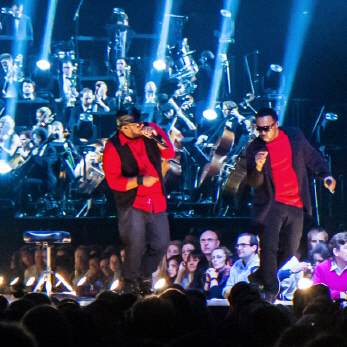 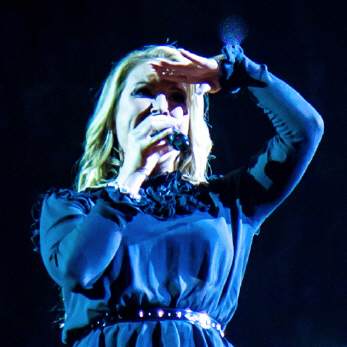 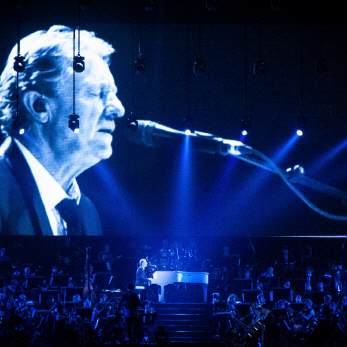 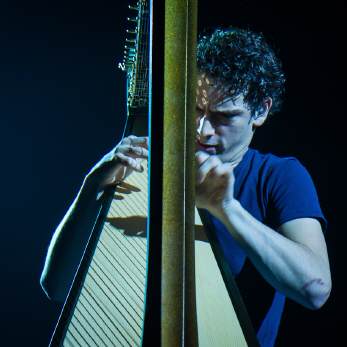 During the second concert in Antwerp (Friday evening) most growing pains of the premiere (difficult passages, wrong notes, etc.) were gone. The American artists have a clear sense of presentation: Anastacia, Naturally 7 and The Jacksons move very smoothly over the catwalk; even Ozark Henry dared to do ‘a Seal’ and leave the podium (like he did in Germany, to the horror of the security). The background images are often divided in sections (like on TV) and they add much dynamic to the show. But they’re also (too) simple during the fifth of Beethoven and absent during I Belong To You of John Miles and Anastacia.

The concert got us all going from the moment the singing lips of Naturally 7 came on stage with In The Air Tonight until the last Shake Your Body Down To The Ground. The tempo was slower than 2011 so that during the more intimate moments (harp play, Ozark Henry) there was lots of chatter: many spectators took offence at that.

Remy Van Kesteren took care of the classical contributions. Remy remained himself, wearing jeans (another pair in the second part) and a T-shirt or shirt. Luckily Carl Huybrechts (persuasive presentation, Carl!) asked for silence during a couple of pieces so there was a lot of attention for his play and his technique. The harp isn’t just an instrument for romantic evenings, but it pointed out to be powerful and even funky. Asturias of Albeniz won’t leave us, and Remy’s technique at La Vida Breve (M. de Falla) is very convincing. You will also enjoy Patrick De Smet and his castanets during this one. Thank you, Remy!

The classical music share isn’t moving backwards. The relation classic / pop is again approximately 1 / 3, just like 2011; look back at 2011’s playlist: http://www.notpfan.eu/homepage-nl/concert-playlists/?lang=nl&lID=1&yID=27. And then I’m not even bringing in the Toccata & Fuga (not Bach’s), in one’s opinion a good piece, in ours a kind of cheap effect.

With Indian Summer and This One’s For you Ozark Henry gave us two of his greatest hits. Also the never published and intimate An Angel Fell It’s Done was magnificently orchestrated and Piet (Goddaer from Ozark Henry), with his classical roots, was in a good mood. Because he is more the type of a serious singer, he was well placed against the American dazzling swagger. 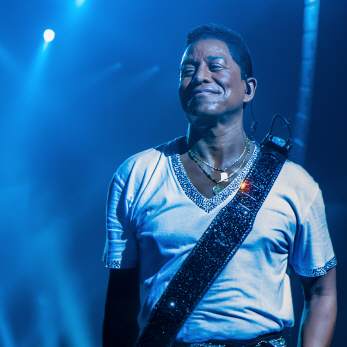 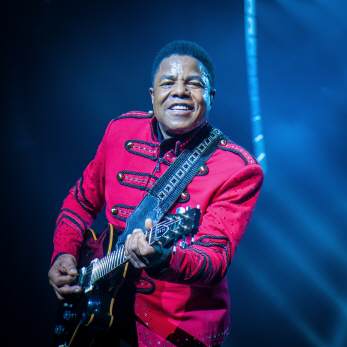 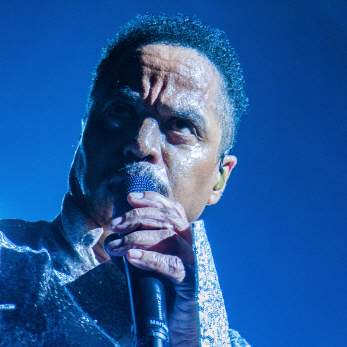 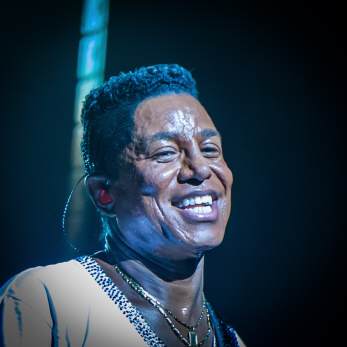 What a great idea to do a little in-between quiz, like in the changeover through Erik Van Looy to Ennio Morricone’s film music from The Good, The Bad & The Ugly or to La Vida Breve! It keeps the tempo on track and lets the audience think along.

Everyone loves John Miles, and they should. Music, introduced by N7, was again a highlight and Angel got its well-earned success. But John can just as well sing a duet with Anastacia or he plays in the back the guitar solo during Best Of You. But most of all… What a voice and what a magnetism Mister Proms has!

And now the heights of the evening. Anastacia convinces with her songs, her voice and her sense of presentation. Powerful and dynamic, full of life and eagerness. Presented through pink petals, she lets herself get introduced in a relaxed way, but then she steps on stage and wraps up the audience with Left Outside Alone. Best Of You, in this version, attracts us more than the original of the Foo Fighters. And I’m Outta Love is the last exuberant highlight before the break.

And finally The Jacksons: a complete American choreography with gestures, dancing steps and built in silences, one brought with an enthusiastic smile, the other with sincere seriousness. The audience took it like candy. Here and there you saw an enthusiastic fan in a Michael Jackson outfit, but the performance was mostly a great tribute to the music. The Jacksons’ voices are no longer that strong, but everyone enjoyed the swinging hits of so long ago. It was perfect for the Proms! A tribute to Michael Jackson could absolutely not be forgotten: with a long drawn-out version of Shake Your Body Down To The Ground their performance ended. The Jacksons themselves were really enthusiastic about it as well; check their website: http://www.thejacksons.com/home/.

But again: what arrangements (especially Dominique and Greet: well done!), what an orchestra, what a technique: this is a party.