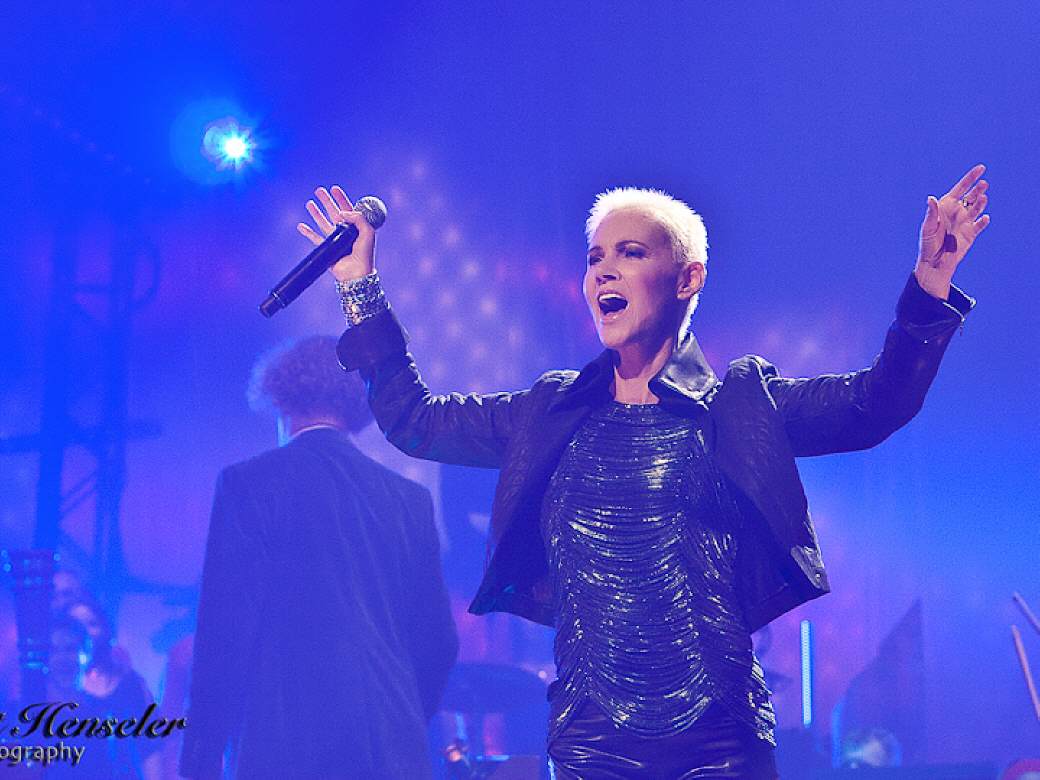 The producers had promised a fabulous jubilee and they kept their promise in every way.
As always we positioned ourselves on the arena floor, nice on time. When Heineken was still the sponsor in Holland -like Nokia is in Germany- The NotP sometimes was called 'The largest pub in the country'. But now, leaning on the fence at the end of the catwalk, with our drinks, we really felt like standing at the bar. The resemblance was unfortunately even bigger because of the loud chatting of our neighbours, that only stopped when Roxette was on stage.

Suddenly the lights faded and we could hear the first notes of Il Novecento, lights were shining on the large curtain in front of the stage. An old tradition was re-instated: Als Sprach Zarathustra. But now in a new fashion. Right beside us members of Fine Fleur, dressed in gold, climbed on the catwalk with burning flames in their hands. On the other side of the catwalk fellow members of the choir met them. The curtain opened and the well known opening piece changed into a specially written, new overture: Nox Argentea. After the last notes had faded and the entire choit sat kneeling in front of the orchestra, Robert Groslot directed the flames to go off, with one gracious stroke of his baton. A beautiful opening for this -not golden but silver- anniversary edition.

In the first classical piece that followed -Brahms' Hungarian dance nr. 5- Robert Groslot did not just direct his orchestra, but also the public. A good starter, and with some suprisingly good tempi.

This opening turned out to be a golden (this time for real!) formula that was maintained for the rest of the night. A lot of variation, interaction and surprise elements in the already fantastic line up that was presented. Sometimes it even felt like an emotional roller coaster ride: One moment I felt hounoured to hear the intimate an still genious sounds by Toots Thielemens, the other moment I was overwhelmed by the soundwave from the orcehstra and the choir, the fireworks and the confetti that introduced and accompanied Sharon den Adel. All senses were teased: breathtaking sounds, cold chills from the brave and fragile Marie of Roxette, heat waves from the fireworks, beautiful light arrangements and special effects and dancingfor the eyes. Even our noses were presented with some nice fragrants that were blown into the audience during Tchaihovski's Flower Waltz. I wonderd if the people who were sitting right under the fans on the second balcony didn't get an overdose or a wet suit...

The Kantona twins were the first of the artists to perform and they did very well with a powerful piece: Scarlatti's Metemorphosis. A good decision for this moment in the show, not to start with a more intimate piece of music. Their mix of classical popsongs just after the break also proved to be a right choice to warm up the audience again. Their contributions to the re-written versions of La Gazza Ladra and Stairway to Heaven were less profilic, though I would have loved to hear more of these gifted twins. But the programm was very full already!

Because there also was the second (or rather third) instrumantal artist: Toots Thielemans. And what a performance! 87 years YOUNG as he said himself, he still proved his much admired record with visible pleasure. With an amazing breath he still improvised every well known melodie to an sursprising ending. What an honour to see to everybody's appreciation.

'Our' Dutch singer Sharon den Adel of Within Temptation was the first of the pop artists to appear. The introoduction was e masterly bombastic spectacle, accompanied by the choir Fine Fleur, fluorescent, white monks rising from the floor, smoking geisers and flames and pieces of paper that were shot to the roof. Sharon's voice was very impressive and she herself was very dynamic. A shame she didn't get the audience to share in her enthusiasm, but I don't believe they didn't appreciate her perfomace any less.

The Swedish Rhapsody of course was a nice way to introduce Roxette, singing I wish I could fly. This, by the way, was the only surprising classical piece, together with the game music. That last one was a nice try to innovate the Proms, but I hardly think it connects to the everyday life of the most Proms fans.

The audience really came loose for the first time with OMD mounting and oddly dancing on the stage. Maid of Orleans of course is a classic, but people really started dancing and singing along with Locomotion and Enola Gay. Unfortunately this already proved to be the end of part one.

Though a bit sceptical at first, the dance act by the Antwerp Let's Go Urban was very good. Nice to see what can be achieved with such a project. But we were so highly focused on what was happening in front of our faces on the catwalk, that we almost forgot to watch at the amazing stunts that were performed on the main stage!

John -Mr. Proms- Miles added two more classical pieces to his already impressive ouvre. It's a pity his Best Of the Proms CD has already been released, because both songs -Stairway to Heaven, together with the Kantona Twins and Sharon den Adel, and If I Could as a duet with Toost Thielemans- were skilled performaces again.

The projections of morphing photos of every kind of co-workers and contributors that were shown during the Boléro were for the first time distracting from the music, as everybody was very much trying to guess who was going to appear. I'd like to give my appreciation after all to a lot of people that were shown and I wanted to cheer and applaud for (but the rest didn't, and as I am already known as a very fanatic fan, I didn't want to be appear even stranger)!

If, and only if, I had to give one very small and personal minus, then it is that I found that Roxette took too big a part in the second half. Not that they aren't good enough! Marie's frail appearance and her willpower were truly compelling and the songs that were performed were all very suitable for the Proms. The thing is, I never really was a big fan of theirs and after being spoiled with very dynamic show, I couldn't focus for very long on such a large piece from one artist. Just one song less would have been well enough for me. But, I totally understand why they did get this large amount of space and time, so this really is a very minor and personal set back.

One other, just as small minus perhaps was that we again had to sing along with the same Dutch evergreen (Kleine Café Aan De Haven) as some years ago. And very obvious to fill up some time to change the stage or something. But I don't think anybody else cared.

Land of Hope And Glory, passing into John Miles' Music, was a right closing of this wonderful night. Although a traditional Beatles song (perhaps another then we are used to) would have been nice again for this occasion, too.
I am very curious what all this will lead to next year. The expectations have never been higher than now! But first I am fortunate to enjoy this party again in Cologne in December.